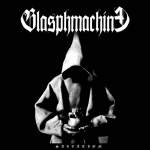 The Malaysian three-piece BLASPHMACHINE is around since 2012. Since then, they might have released a lot of records, split releases, EPs and demos in extremely limited editions of 120 and less copies. But this conceals the fact that all of them feature the same six songs, more or less. All of them were featured on the EP “Salvation” which is now available for the whole world in an expanded version. Now, what does BLASPHMACHINE have to offer? Quite a lot, I should say. Their blackened Death Metal is infiltrated by a lot of Grindcore ideas. Especially the first songs, those who made up the original tape EP, are marching that direction. “Salvation” starts off with screams of anguish and a blast beat that opens up for a NAPALM DEATH styled song called ‘Temple Of Desolation’. With ‘Malleus, Maleficarum’ and ‘Heathen Fire’, we have more highlighting tracks, even though I can only state that the whole stuff from that EP is fine food for lovers of early to mid 1990s NAPALM DEATH fans. Those two songs that are featured as bonus stuff can’t completely keep that level. The still fine and pretty long ‘Leviathan’ is more on the Death Metal side, with a doomed basic beat interrupted by fast outbreaks. But the closing BLACK WITCHERY cover ‘Into Damnation Eternal’ is a rather unnecessary extra, another original BLASPHMACHINE song would have been better in my ears. Despite that, “Salvation” is really nice stuff from a band that has a promising future. So, check ’em out at www.facebook.com/blasphmachine or visit the label responsible: www.dunkelheit-produktionen.de