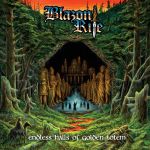 Philadelphia’s Heavy Metal quartet BLAZON RITE harken back to the past when Metal was simpler, when there was no screamo bullshit (you know, those younger bands that screech one minute and sing like a boy band the next), and when there was a little fun in the cheesiness of the lyrics. Johnny Halladay (vocals), Pierson Roe (guitars, bass, synth), James Kirn (guitars) and Ryan Haley (drums) aren’t that tight of a band, and the vocal range is a little flat. But there’s something I can see that must appeal to their fans. And I get it. Their first album “Endless Halls Of Golden Totem” won’t break boundaries, but just may nestle nicely between other bands in the genre. ‘Legends Of Time And Eidelon’ is a track of somewhat bad lyrics, but that’s sort of accepted in this type of Metal, where battles wage and swords clash. The guitars are fairly simple, as are the drums. But that’s ok. Sometimes simplicity is a breath of fresh air. ‘Put Down Your Steel (Only For The Night)’ is a mid-paced ditty about sex (hence the title). I mean, even warriors need a little love, right? The third track ‘The Executioner’s Woe” begins with “Sharpen my blade, put on my hood. It’s killing day. I’ll bring them to my knees.” Did everyone actually wear hoods back then, or is it a modern fantasy trope? Who the hell knows… ‘Endless Halls Of Golden Totem’ is a 70s style of Hard Rock that’s actually quite satisfying. ‘Alchemist’s Brute’ (Is this about aftershave?) is a rawkus tune as ‘The Nightwatchmen Of Starfall Tower’ (which would make a nice fantasy novel title) is more classic Rock goodness. ‘Consumed By Glory Light’ and ‘Into Shore Of Blood’ round out the album. Is their debut album worth a listen? Well, yes. Could there be less cheesy lyrics? Certainly. But does it satisfy an itch for fantasy Metal that summons the late ’70s / early 80s style of the genre? Only you can decide. But hey, it’s their first full-length. There’s only room for growth from here. For more info, check out www.facebook.com/blazonriteofficial, www.facebook.com/gatesofhellrecords