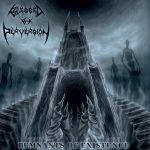 BLESSED BY PERVERSION is a Greek Death Metal band that has now been active for just over a decade. “Remnants Of Existence” is their second full length release and their first with Iron, Blood And Death Corporation. The sound on this release is at an interesting crossroads, this isn’t a regular jab at old school Death Metal, it certainly has its roots in it, however the execution is completely with modern twists. The solos for example on ‘Gallery Of Bones’ are a refreshing modern take on the traditional approach and it works really well. The riffs are mostly generic with a twist of technicality, but bloody hell, performed with insane relentlessness and accuracy. The most modern sound on this album is that of the drums, it doesn’t take anything away from the songwriting on the whole, but you know it keeps popping up in your mind now and then. The band mainly sticks to a mid-tempo approach of Death Metal with chuggy basslines all throughout. The production is fantastic and each instrument is given its due. I particularly like how the bass is mixed here, in some places it almost feels like the gallop-approach of Steve Harris which is a fantastic thing! The vocals kind of stick out in places with the rhythm thinning out but it’s the least of your worries. To sum it all up, invoke a dash of Black Metal’s atmospheric essence (track # 5 ‘Caverns Of Torture’) and add to it a really well written mid tempo Death Metal which dips in and out of modernity with a no-nonsense killer execution! This is good Death Metal, at just 24 minutes this release is perfect! Recommended, do get a copy. For more information, please visit www.facebook.com/blessedbyperversion or www.facebook.com/ibdc666