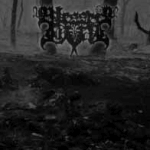 BLESSED OFFAL hails from Boston, USA and takes us, with this EP, into their darkened universe of heavy, and at places doomy, Death Metal. A juggernaut of an evil release with 5 tracks of relentless brutality. The Death Metal scene is on a rise, it’s been quite some years since I’ve come across as many talented bands as I have the last six months – most of them excelling in good old brutal and dark Death Metal without too many modern treats and shenanigans. BLESSED OFFAL is also a purveyor in the old school vein, with their blend of grinding madness and doomy and eerie passages, with a dark and guttural growl from deep below, with both emotion, frustration and anger. We are getting thrown through the wall more than once, when the band changes pace from slow and almost droning to blasting and aggressive straight to your face Death Metal. The expression is intense all the way through the 5 tracks and it is hard to stop listening, when one first have entered the realm of BLESSED OFFAL. The band has some touches of the old Swedish Death Metal scene mixed with American Death Metal, though have made their own mark and distinctiveness. It is of course not original as such, it is Death Metal, though not many is or have been doing it as BLESSED OFFAL does it right now. When they go from intense and smashing moments to their atmospheric, heavy and dark as thunderclouds doomy passages, as they almost do in each song, the music and atmosphere become nothing less than jaw dropping. Just listen to the shifts in ‘Seasons In Sepulchral Depths’ and ‘A Means To An End’ and the majestic and ominous doom passage in ‘Bottomless Grave’, if such doesn’t get you hooked on this band, nothing does, damn it’s well made! Well the great melodic to raw guitar leads, the punishing drumming or the general good use of effective riffing and rumbling bass, could might also get a hook in you, when I think about it! The band has been going since 2004, first as EXSANGUINATION and later that year they changed name into BLESSED OFFAL and do only have one demo as the first, one as the latter and now this EP released, so be sure to pick it up before it is too late, as we can’t be sure when we again will be hit with an attack from this monster of a band! www.myspace.com/blessedoffal