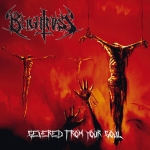 Formed as PURGATORY UNLEASHED back in 2014, this band based in France although with an American vocalist, presents their debut album of brutal Death Metal in the American vein where DEICIDE, MALEVOLENT CREATION, IMMOLATION and early MORBID ANGEL are the names. They also do have strong evil Thrash elements in the vein of the SODOM and KREATOR style, and that is a good choice as their too much brutal parts at times sound a bit similar, and those more thrashy breaks add a fresher side to their music. Vocalist Jesse (from AMON, the Hoffman’s band and yes ex-DEICIDE members) is pretty much adequate to the music, yet some variation in the vocals will be more interesting. Production-wise the band sounds good, maybe a bit more volume in the drums for my taste, but in all it is quite good. The lyrical theme of the band is that of death, pain and desolation, which is obviously more than welcome for a Death Metal band. A mention must be done to the solos, as they are above average than many Death Metal bands, I must mention legendary guitar player Ralph Santolla collaborating with solos in a song. Also they do a quite good cover of a CARCASS song (of which I do not find that much influences in their music, and it might not be a bad idea to include more of the “Heartwork” and “Symphonies Of Sickness” influences and also the more high pitched vocals). Taking in count this is their debut and how good it is, a promising future lies ahead if they follow with convition the cold finger of mother death. www.facebook.com/blightmass, www.facebook.com/greatdanerecords

Julián “When He Wakes” Núñez

Julián "When He Wakes" Núñez