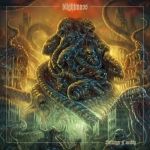 BLIGHTMASS is an international French-American project with members from various underground Death Metal bands. In the line-up stand out a couple of names pretty known in the American scene such as the bassist Jesse Jolly (ex – DIABOLIC, AFTER DEATH and AMON), the guitarist Jack Goodwin from PATHS OF POSSESSION and the drummer Ronnie Palmer (a talented session musician that has played with AMON, INSATANITY, MALEVOLENT CREATION, PERDITION TEMPLE, BRUTALITY, ANGELCORPSE and KERASPHOROUS just to name a few). “Harbinger Of Lucidity” is the second full length album recorded by BLIGHTMASS and recently released by Grave Embrace Records. A total of ten songs for almost 35 minutes of punishing and fast brutal Death Metal in the traditional Floridian form. Here we have guttural vocals alternated with sick screamings, technical and intricated guitar riffs, ultra fast drumming, some killer solos, a solid and present bass. The drumming is very prominent in the mix with tons of blastbeats and an hammering double bass. The style is strongly influenced by ultra brutal American bands like MONSTROSITY, SUFFOCATION, GORGASM, INTERNAL SUFFERING etc. The cover artwork is a typical gory and Lovecraftian landscape, pretty reminiscent of Dan Seagrave’s paintings. In conclusion, if you’re into US brutal Death Metal, this a good addiction to your collection. More info at www.blightmass.com, www.facebook.com/blightmass