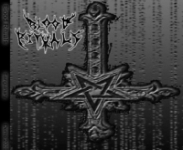 I received this demo from Andreas from Putridodistro who is distributing Latino Death and Black Metal in Europe. As I am really interested in Metal from all over the world but especially from Latin America I was really curious about BLOOD RITUALS, which are two guys from Bolivia who are called Possessed Blackheart (guitars, bass, programming) and Lix Tetrax (voices). On their myspace page they describe their music as "cold, dark, heavy and anti-Christian Black Metal, without keyboards, little melody but great sound from beginning to end". And this is a very good description. The first song ‘Sanguinary’ starts with typical Black Metal blast beats but then it is interrupted by a really nice bang part which is highlighted by some clean guitar accords. This one is followed by the track ‘Unholy Rebirth’ which is more mid tempo and has a nice melodic guitar. This is my favourite track of the demo. The last song ‘Delirium Of Death’ starts slowly and is interrupted by a blast part before it flows into a groovy mid tempo section. In the end the song is getting faster again. The vocals from Lix Tetrax change between Black Metal screams and more Death Metal growls. You hear that the drums are programmed but that is not a big deal. Also I have to be honest I was surprised by the good sound of this demo. There are a lot of Black Metal productions from Europe that sound a lot worse, but you still have this Black Metal feeling. The demo brings nothing new to Black Metal music but it is fun to listen to. So well done boys and if you are interested in Metal from other areas of the world give them a chance www.myspace.com/bloodrituals666 or get in touch with Andres putridodistro@yahoo.se