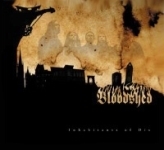 Even though “Inhabitants Of Dis” is the debut full length by Sweden’s BLOODSHED, the band is no newcomer to the scene anymore anyway. Ever since their origin way back in 1996 they already released two demos and a quite successful MCD (“Skullcrusher”) of which they managed to sell respectable 3.000 copies! I personally never heard those items, but this album here definitely sounds extremely matured and is raw as fuck! Almost unbelievable that it was created at the (in)famous Studio Sunlight with Tomas Skogsberg producing. Musically I would label these guys as intense blackend Thrash with a couple additional death grunts. Just imagine the current, rather thrashy IMMORTAL style, but performed a whole lot more furious. Kinda like a mixture of the grim DARKTHRONE stuff combined with a razorsharp NECRODEATH type of Thrash (or MARDUK, MERCILESS and NILE, if you prefer – as mentioned in the label info). The riffing is awsome at times (and most certainly heavily inspired by the riff masters SLAYER), especially when the band isn’t playing full speed ahead. I just don’t really see the need of the occasional used additional Death Metal vocals (as they not exactly fit the overall furiousity of the band), but it’s nothing major and I suppose I just bring that up because I didn’t find any other aspects of criticism… So, if you like your Metal extreme and without any (wimpy) outside influences, make sure to give these guys a listen as BLOODSHED is certainly one of the better bands from Sweden lately. www.bloodshed.info