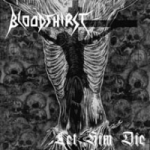 Poland got many outstanding Satanic and blasphemous Death Metal bands today, but I never heard of any Polish band with the same ideology playing Thrash Metal until I heard BLOODTHIRST!! This band has already released three demos, four splits, a live album as well as a compilation; but only now after 8 years of existence they got to release their debut album. The opening track, ‘Upon The Cross (Tormented And Lost)’ really reminds me of ‘Pleasure To Kill’ from KREATOR from the beginning till the last second, and mix it with some DESTRUCTION riffs! Totally destructive!! While ‘Thrashing Madness’ takes me into the SLAYER era of “Reign In Blood” until the chorus which starts turning back to KREATOR again. KREATOR really is a big inspiration for BLOODTHIRST as you can hear many KREATOR-esque riffs here and there. But they also got much influences from Bay Area Thrash Metal especially from Slayer, Dark Angel and Nuclear Assault (Bay Area? – Ed.) and the melodic parts may come from DESTRUCTION. The vocals are harsh and brutal, sometimes they also sound like a Death Metal vocalist. This is the Thrash Metal vocalization style that I like. With 9 tracks (no intro or outro shit!) running for 35 minutes, it’s really a pleasure for me to listen to this Polish Satanic Thrashers!! BLOODTHIRST – Hateful Antichristian Thrash!! www.bloodthirst.pl