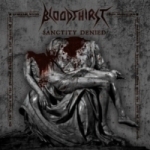 My first impression on this second album of this Polish trio was that it sounds good, but it also sounds like many bands. After a few more listening, it was clear that I was enjoying the music, the riffs, and most of what this album was about: straight in your face Thrash / Death Metal, which steals riffs from all those bands you can name, SLAYER, KREATOR, METALLICA, SODOM, and… well, you can do the list yourself. But then again, I was left with an empty feeling…I felt something was missing… but actually, it was just that I was getting tired of the thousand bands doing the same over and over again. Also I felt the production, while having a great guitar sound, was a bit lacking of treble frequencies, and maybe a bit drowned drum sound. I appreciate they didn’t went for those boring clinical sounding productions, but then again it does not sound as organic as it could be, thus taking away some power. Lyrically, they also step on the satanic, anti-religious ground countless others have done before; and while that is something I might not get tired soon of, there is something still that does not feels complete. Many songs tend to have a similar vibe, and the “mosh” parts are not exactly my thing, as they felt a bit out of place, or too forced to make this sound old school. As it is, an ok Deathrash Metal album, with some catchy riff like in ‘Rage Of Dogs’, yet, way below than the original bands, and not with any single piece of identity. With a better production, and more variety in the vocals, they can surely reach a new level. So far, so good, but not that great. www.bloodthirst.pl, www.pagan-records.com