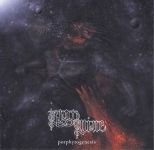 Sweden’s BLOT MINE are sort of an enigma. Are they still together? Have they split? Why’d it take so long between their two albums? Who knows? What I do know is, I had a negative vibe from them years ago when I first discovered them. I never actually listened to their album, but gave one as a gift to my brother. As we speak English and have little idea what BLOT MINE means, we laughed at the name and never gave their music the credit it deserved. And yes, we were the morons who laughed at the band name even though we knew we didn’t understand what it meant. Oh well, our idiocy. Fast forward to now when I had the chance to listen to “Porphyrogenesis” for the first time, along with the “Kill For Inner Peace” EP which is included. My opinion quickly changed. ‘Greater Than Life’ kicks it off with a familiar Black Metal sound. It was 1998 when it was first released. But the production is clear. Thunaraz’ guitars (from SETHERIAL) are recognizable. It’s the perfect song to introduce “Porphyrogensis”. The buzzing guitars and rapid drumming in ‘Sha Nagba Imuru’ blister and ovulate (yes, ovulate). The vocals by Steril Vwreede are pure shrieking at their finest. There’s atmosphere in ‘My Soul In Fury Flew’, which slows things down a bit. ‘Dumu-Abzu-Ke’ is furious and sweltering, as ‘Without Words ‘ is similar in its delivery. Right about now I was questioning my naivete in not giving the band a chance many years ago. ‘Fragmented Red Sun’ and ‘Off To War’ carry on the bludgeoning. The demo includes a different version of ‘Off To War’ with rawer vocals that clearly needed a little work and thankfully evolved before their full-length was released. ‘Coffins Of Clarity’ blasts away musically as the vocals still suffer a little. The EP itself demonstrates a band that anyone could tell had great potential. So… to sum it all up… If you’re a dumbass like I tend to be, don’t judge a book by its cover. Give BLOT MINE a listen. I’m pretty sure you’ll discover an impressive Black Metal band that kicks ass with the best of them. For more info, check out www.facebook.com/blot-mine-113023087505676, www.facebook.com/vic-records-321130546025