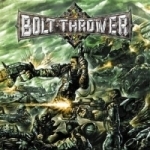 You didn’t really expect any musical changes from BOLT THROWER, did you? But you were skeptical whether new recruited, and former BENEDICTION frontman Dave Ingram would manage to fill in the shoes of Karl Willetts?! Yeah, same here… Especially because of the fact that I didn’t really like Dave’s vocals in the past too much. Well, I still don’t, but at least gotta admit that he’s delivering a far more convincing job in BOLT THROWER than he did in his old band. Could that be due to the fact that BOLT THROWER are simply writing the better material?! I don’t know… But I know for sure that with "Honour – Valour – Pride" these british warmongers have already unleashed their 7th full length of high class material in the history of the band. The album exactly follows the tradition of BOLT THROWER’s previous outbursts and therefore should easily satisfy the needs of all their diehard fans. To me, BOLT THROWER somehow have created a sub genre within Death Metal, which doesn’t exist yet, but which I would like to name "Bulldozer Metal" here. Their music just grinds you down in a similar vein. Consequently you won’t find any blast beats on the entire record, but the extremely heavy riffing of Gavin Ward and Barry Thomson in combination with the driving rhythm section courtesy of Jo Bench and drummer Martin Kearns is far more devastating anyway and without mercy easily crushes everything in sight. Lyrically, as well as visually (just have a look at the incredible new frontcover artwork), BOLT THROWER once again went for the war topic, which may have been adopted by several Black Metal bands lately as well, but it never fitted as good to any of them as it still fits to BOLT THROWER’s music. So, to cut the crap – even though Karl’s vocals are sadly missed, this is still another excellent record, which certainly won’t disappoint any traditional Death Metal fan!

BOLT THROWER - Those Once Loyal - by Kenny Strömsholm