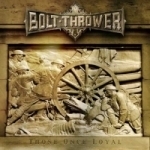 Memory is a funny function of the brain, to have this ability to retain information based on duration, nature and retrieval of perceived issues and items. And we all have the capability to gather this data from long lost moments in time. To me Death Metal brings back a lot of these distinctive jiffies, remarkably Death, Obituary and Bolt Thrower. It brings back memories of the late 80s and the battles of bands between friends and foes. Foes, those ill-natured poisoned spirits with roots deep down on churchly ground; friends, those once loyal standing with the banners high. A battle between children from the kingdom of heaven and rebel kids from the outskirts of the firmament. Anyway, just a brief glimpse of how things used to be. Still things haven’t actually changed much since those twenty years. Bolt Thrower is back on the battlefield with a vengeance and finally Karl Willetts is back on vocals, something I eagerly longed for, because to me personally Dave Ingram was not the voice of the Bolt Thrower rampage. Dave did an excellent job, oh yes he did, but Karl has the voice to put the Bolt Thrower machinery in the crushing strike down mode. I can’t think of any other Metal band giving this kind of mental and physical rush of fever; the biased sound, the typically leading guitar riffs, massive rolling overdrive of drum groove is the trademark of classic Bolt Thrower. Just pick any of their albums and it still has the same infectious vibe. They never let you down. How many similar bands do you know? Not a single one! No other Death Metal act has the same penetrating power and driving force of uniformity. Some things can remain precious and permanent without the touch of obligatory renewals. You know which prestigious warmachine is loyal, and it rolls for victory and pride. This is the first time when not even voiceovers can ruin the day.