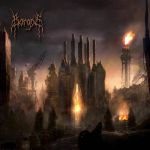 When researching band info, it’s interesting the things you find out. BORGNE’s keyboardist Lady Kaos has played live with female Black Metal masters ASAGRAUM, and Bornyhake (vocals, guitars, drums) has been in more bands than anyone can count, including a band called THE TWO BOYS SANDWICH CLUB. There’s a part of me that really needs to find out answers about this. Anyway, Switzerland’s BORGNE have been around since 1998. That’s a long-ass time. And although they’ve always sort of been Industrial Black Metal, their new album “Temps Morts” sounds much more 90s Industrial than it does Black Metal. And shit, that’s not a bad thing at all. The opening track ‘To Cut The Flesh And Feel Nothing But Stillness’ could easily fit right in with early NIN. The metallic drums and subtle keyboards linger a little before erupting into a much louder, heavier sound. Musically, it’s pure Industrial. Vocally, there’s a CRAFT sound that screams and floods like tumultuous waters from the stirring sea. ‘The Swords Of The Headless Angels’ is a steady-paced track with monstrous vocals different from the track before. The beat could easily be played in the best S&M clubs. ‘L’Écho De Mon Mal’ is an amalgamation of machine-gun drums and melodic guitars. Plodding drumming emerges as the guitars buzz and the vocals regurgitate. Some classic Black Metal guitars begin ‘Near The Bottomless Precipice I Stand’ until the mound of furious drums kick into high gear in a blur of centrifugal force. ‘I Drown My Eyes Into The Broken Mirror’ (what a great fucking song title!) is melancholic before ‘Vers Des Horizons Aux Teintes Ardentes’ brings back the sonic melting pot of Black Metal vocals and ominous aural purges. ‘Where The Crown Is Hidden’ continues the tempo with a hint of old school Industrial drums (hammers hitting metal), lumbering on and on until ‘Even If The Devil Sings Into My Ears Again’ brings back that NIN – like sound. ‘Everything Is Blurry Now’ ends the album in an epic feast of everything that makes the album the glorious piece of music it is. Ok, so pure Metalheads may not ‘get’ this album or band. I understand. But damn, BORGNE’s as heavy as anything else you may listen to this year. And although the Industrial sound doesn’t really sound like others such as MYSTICUM, it’s a nice blend of old school beats and Black Metal themes. There’s a reason the band’s lasted as long as they have. But there’s still that question about THE TWO BOYS SANDWICH CLUB… For more BORGNE information, check out www.facebook.com/borgneblackmetal, www.facebook.com/ladloproductions