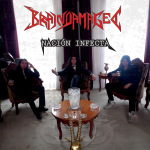 Colombian Thrash Metal outfit BRAIN DAMAGED started back in 2007. It was until 2012 that they put out their first material, namely the "Dosis De Metal" EP. When a friend of mine recommended me the EP, I gave it a chance, but it didn’t spark my interest. Fast forward to 2016 and their debut album "Nación Infecta". And when I saw a chance to review it, I dived into it. Sincerely, I was expecting something similar to their debut EP, but this time BRAIN DAMAGED has proven me wrong. This is one hell of an album. It has its ups and downs, but overall, I really enjoyed it. Let me get the bad stuff out of the way first: they need to improve their leads. They are somewhat un-inspiring and / or sloppy. Second and last: the production. I really don’t know if these guys were going for a vintage or retro style or if they had some limited resources. But I found it really hard to sit through the whole thing upon first listening. The sound is kinda hollow and muddy and it can get really annoying. Specially the snare drum and the rhythm guitars. The bass sits right in the middle of that, so it helps to fill in for the lack of low frequencies. So, after getting used to that, the songs really deliver. Intense, mid to fast paced, in your face Thrash Metal like it is supposed to be. The South American influence is undeniable. I mean, think of the thrashier side of ATOMIC AGGRESSOR and DEATH YELL mixed with some modern hints. They also sing in their native language, which I think is really cool. There is a lot of social and political issues dealt with here, as in early SACRED REICH. Curious enough the vocal performance reminded me of Phil Rind with some Mille thrown in there. Thrash Metal has had its return in the last decade or so and it seems there are thousands of bands doing exactly the same. It feels like a formula. But BRAIN DAMAGED has managed to create something that, although is Thrash Metal in essence, has a lot of their own sound and identity to differentiate from countless others. A band to look out for in the future for sure. Kudos to Symbol Of Domination Productions for releasing this LP. More information at: www.facebook.com/lethalbraindamaged, www.satanath.com/sodp.