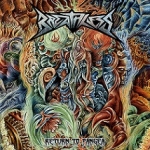 There has never been a better time for the Spanish Metal scene than right now. I barely remember any band besides BARON ROJO and OBUS who could have been part of any Metal head conversation 20+ years ago. Now, Spain has graced us with some of the excellent bands of almost any genre and in parts thanks to the dedicated hard work of Mr. Dave Rotten from Xtreem Music who has been probably the most responsible for this achievement. As part of this new era comes Thrash Metal youngsters BREATHLESS with their second album ready for the kill. As like their previous album they effectively create the classic atmosphere done before by bands like FLOTSAM AND JETSAM, AGONY and even VIKING among others. Production wise, “Return To Pangea” is a significant improvement over their last album, especially on the guitar department which I simply enjoy very much. Songs like ‘Atomic Waste’ and ‘Masterade’ probably display albums best riffs where they could go one on one with other young but most popular Thrash Metal bands like HAVOK, WARBRINGER for example. BREATHLESS definitely can use the “you don’t fix what is not broken” motto, since they are not creating something new but definitely showing more and more that they are ready for the big leagues of the genre. www.facebook.com/breathlessattack, www.xtreemmusic.com