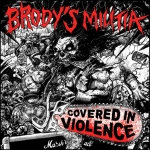 The Punk Rock Metal infused powerhouse BRODY’S MILITIA out of Kentucky, now residing in Ohio, has always been quite active and has during the years unleashed a ton of releases, a lot of them containing a covertune or two. Paying homage to the inspirations for the band and their music, has always been an important feature for BRODY’S MILITIA. Trauma Records has now collected a broad collection of goodies from the band’s catalogue and put them on one massive release. The main feat is the "Covered In Violence" album from 2012, containing 10 cover versions, on top of that we are getting the band’s participations on the splits with RUPTURE from 2010 and with NUNSLAUGHTER from 2006 and their "Tribute To Butchery" EP from 2003. A quick look down the tracklist shows a quite broad array of music that has inspired the band, something you’ll also notice when listening to the band’s own music of course. We have among a lot, tracks from LED ZEPPELIN to CELTIC FROST to NAPALM DEATH to RUPTURE to ANTISEEN to BLACK SABBATH, a full circle of Rock’n’Roll, Punk, Heavy Metal and Death Metal, and BRODY’s MILITIA has an affection of it all, which shines through the intensity of the covered tunes. My favorites on the record are the two tracks from the NUNSLAUGHTER split, CELTIC FROST’s ‘Morbid Tales’ and SARCOFAGO’s ‘Ready To Fuck’, both close to the originals, though with an intense and twisted BRODY’S MILITIA feel. ‘Riding With The Driver’ from MOTÖRHEAD, ‘Dazed And Confused’ from LED ZEPPELIN, the medley of ‘Satanic Slut’ and ‘Burning In Hell’ from NUNSLAUGHTER, ‘Ugly American’ from ANTISEEN, well there are lot of tracks taking the price for being kick ass delivered, you can hear that the band had a blast and party recording the tunes, and that’s how a cover version comes to live, and getting a life on its own. Contact the label, to get your hands of this slab of madness, right here: traumarkhan@hotmal.com