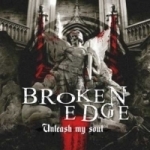 BROKEN EDGE is a relatively long-running French Thrash Metal band (formed back in 1989 already), that relies on aggressive, groovy sounding, modern, heavy and even a relatively technical Thrash Metal, with a good dose of Death Metal in their sound. At least they do so on this band’s latest 6-track EP, titled "Unleash My Soul". As for some background info of them, this bunch has already recorded 3 full-length studio albums – along with some EPs and demos, prior to the band’s brand-new "Unleash My Soul" EP. My first impression on the EP was a positive one. I wasn’t completely "sold" – so to speak, for BROKEN EDGE’s stuff right away but after a while their stuff started growing in me, me sort of realizing that they do have some potential after all. Even if they could mostly be labeled as Thrash Metal, there’s in fact quite a lot of influences from Death Metal in their sound too. For example a song called ‘Marching With The Fools’ reminds me distantly of ‘Where The Slime Live’ by MORBID ANGEL (start listening right after the 36 seconds mark). The band’s vocalist Thierry Marquez even has lots of the same, deep punching edge and evil charm in his voice as there’s in David Vincent’s vocal delivery in "The Morbid Ones". ‘Stone Cold Evil’ is also more closer to Death Metal than Thrash Metal structure-wise, having a great amount of heavy, mercilessly rollin’ grooviness in it. The same words could nearly be used for the title track, ‘Unleash My Soul’, only with that exception there’s more groove-infested Thrash riffing present in it. I have no idea how the band’s previous releases sound like, but based on my reactions (mostly positive ones) about the EP, I may well start digging up their back catalog of releases from somewhere too. Band’s home page: www.brokenedge.com, label: www.greatdanerecs.com