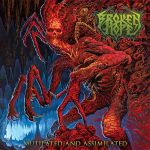 So here we have the album that was written using Jeff Hanneman’s guitars. As you probably know, BROKEN HOPE’s guitar player Jeremy Wagner bought six of Jeff’s guitars from his widow and vowed to keep them playing. So here is the beginning of that homage. "Mutilated And Assimilated", the title track, is also an homage to John Carpenter’s "The Thing", that most excellent horror movie I had the pleasure of watching at the cinema when I was 9 years old. On Youtube you can check out a cool lyrics video of it that Century Media released. Even the great cover artwork by Wes Benscoter also seems to hint at this classic movie. On to the album, it opens with ‘The Meek Shall Inherit Shit’ and right away you can see the sonic massacre that awaits you. Rather technical Death Metal (without overdoing it as several bands do these days) with fast riffing and complex structures, killer solos, fast aggressive drumming and deep low-pitched growls uttered by Damian Leski of GORGASM, the vocalist of the current incarnation of BROKEN HOPE, that follows a decade-long hiatus. Naturally they would have to go after a low rumbling vocalist after the death of their previous bellower Joe Ptacek, considering the voice he had. This is not the only reason why the most obvious comparisons soundwise would be CANNIBAL CORPSE and SUFFOCATION. Anyway, it’s certainly a pretty good album, with excellent production and impressive compositions, such as in ‘Malicious Meatholes’ that is quite the onslaught before finishing with a phantasmagoric outro. They like to set the horror mood, as they later do in ‘Beneath Antarctic Ice’ ("The Thing" again I guess), and their themes in general are rather horrific and gruesome, with the internet stories seeming to be a privileged source of inspiration, with popular though very questionable tales (not that veracity matters in this case) such as ‘The Necropants’ and ‘Russian Sleep Experiment’. At the end they include a re-recorded version of ‘Swamped In Gore’ (a 25th anniversary tribute) and even though the production is now noticeably heavier, they still sound like pretty much the same band. Finally, a DVD is included with a 36 minutes long live performance at the Obscene Extreme 2015 festival (you can check out one of the songs of it right here – Frank). I have to say as far as American brutal Death Metal goes this album consolidates BROKEN HOPE’s quality, being certainly one of their strongest releases. Give it a go, it’s quite good. A job well done. Find out more at www.facebook.com/brokenhopeofficial, www.centurymedia.com