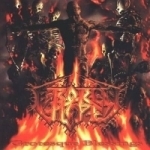 Me coming from the school of well ummm… old school Death Metal know BROKEN HOPE. They have been around since 1990 and have many albums under their gross belt. Starting as a pure gore / grind / death / sludge band and developing into a technical gore-Death band. I personally prefer their early efforts. Vocalist Joe Ptacek gugles like no other on the scene, like a choking pig really. Brian Griffin (guitars & producer & owner of studio) still writes some razor sharp riffs but where this suffers is the dull, flat production. That just takes so much away, and leaves a lot wanted. To compare them I would say: MALEVOLENT CREATION, CANNIBAL CORPSE, OPPRESSOR (R.I.P.). I really do not like this "new" style but fans of technical Death Metal with a touch of gore will dig this.