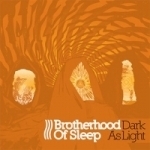 This is a Greek three piece instrumental Psychedelic Rock combo and “Dark As Light” is their second album. To put it briefly, what you get here are 4 tracks or more precisely, 4 long live jams. Now this is a tricky waters to thread as usually such endaveours walk a very fine line between being boring and amazing. So one of the aspects that play a major role in such instrumental jams is the sonic qualities or sound which captures the music. In this case BROTHERHOOD OF SLEEP lack a certain dynamics where in the first track for example the drums are pushed too far in front whereas in later jams they get drowned by the guitar and bass wall of slushy sound. There are some great melodic guitar work at the begining of a couple tracks to set you on a nice trip. Most of the time BROTHERHOOD OF SLEEP employ flowing riffs, not very pronounced but quite effective. My favourite tracks would be the first two ‘Afterlife Unearthed’ and ‘Naze’, especially the latter which has it’s peaks and downs just in the right amount. So if you are fan of such acts as KARMA TO BURN, COLOUR HAZE or CAUSA SUI, I would certainly recommend to check this Greek band and when in right mood, like lazy Sunday afternoon, “Dark As Light” could work it’s magic around you. It is also a slow grower as with many instrumental albums, but I feel that last two tracks don’t stand up as firm to the first two, so there’s a room for improvement definitely. It’s a nice album, but not great. www.brotherhoodofsleep.net, www.ctsprods.com