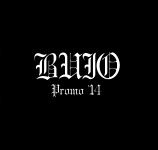 Buio from Italy is the project of mastermind Count Morgul and saw the light of day in 2012. After only one and a half years, he is now presenting the self-financed "Promo ’14". This demo takes us back to the grim years of 1991 – 1992, when a young musician called Varg Vikernes totally got rid of his Death Metal roots and released his own version of a music, that was later known as Black Metal. My personal relationship to BURZUM is torn, as I liked the early stuff but really condemn nearly all, what has been said and done by the protagonists in between and after the church burnings and the totally useless murder of Euronymous and his stupid behaviour afterwards, but I think our mag has clearly pointed out our opinion about these happenings and the mindset of Vikernes, so let’s get back to the music. BURZUM seems to be Count Morgul’s biggest musical influence and the sound of his recording is very fine considering the fact, that this is a rehearsal tape and also the style we talk about is raw, unpolished Black Metal. The presented seven songs have a proper recording quality and professional songwriting and for fans of BURZUM, DARKTHRONE and even old IMMORTAL the right music to check out. Raw and primitive, very dark but also very ambient music. "No Fun – No Core – No Mosh – No Trends” is the program here as well and Count Morgul seems to have been wandering around with a couple of musical ideas for a longer time, until he unleashed his ideas in form of this fine "Promo ’14". With a proper length of 33 minutes, he gives a good overview of his musical talent, as all instruments have been played and arranged by him. Considering his age of only 19, as far as I am informed, this is a very professional output. I think there are still a lot people around worshipping the true unpolished style of the so called "True" Black Metal and if you still adore "Burzum" and "ASKE", you should get in touch with the Count via: lostwisdom@hotmail.it or www.facebook.com/buioItalianblackmetal