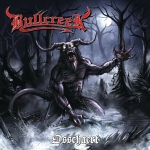 BULLCREEK is a quite unknown band from Zeeuws-Vlaanderen in the Netherlands. Hopefully this will end in January 2017. Consisting of (ex -) members of Dutch bands like BURIAL, MORDANCY, MINDLINK and GOTMOOR, the involved guys are no newcomers at all and exactly know what they are doing. Freshly signed to growing label Raw Skull Recordz, the band’s debut is already a small concept album. BULLCREEK is the English translation for Stierkreek, a lake in the home area of the band members which seems to be haunted by a poltergeist / waterdemon called Osschaert, told in several local tales. The four guys play a very enjoyable and melodic mixture of Death and Doom Metal with deep but well dosed grunts, good instrumentation, proper drumming and a fine taste for songwriting and really good melodies. The seven long tracks have many influences starting with classic Death Metal like BOLT THROWER or HYPOCRISY on their “The Fourth Dimension” album or even GOREFEST during their “Erase” or “Soul Survivor” era (vocals and guitars) but also classic Heavy Metal when it comes to the fine leads and melodies and of course the fundament of the sound is mid 90s Doom / Death partly like BEYOND BELIEF but with a far more melodic approach like their dutch mates PHLEBOTOMIZED did it on “Skycontact”, an album I hated back then and years later rediscovered for me in its total quality. One thing worth to point out is that there are no weak tracks on this album which is definitely seldom nowadays on a debut release. “Osschaert” is a real little jewel which grows from spin to spin and even though Raw Skull Recordz had already some quite fine releases, this band and this album is really the highlight so far in the short label history. Fans of mid 90s Doom / Death or Gothic Death Metal, before it wimped out and suffered from female only fronted bands, should really check this small treasure out getting released the coming January. For more info, check the following sites: www.facebook.com/bullcreekmetal, www.rawskullrecordz.org