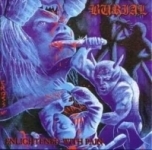 Formed back in 1995, BURIAL are a five-piece from Massachusetts, and this is their first full-length. The material on offer here was recorded exactly two years ago, but as it is often the case with the underground, the distribution process was very slow, and I was made myself aware of the very existence of this album only in 2001. But the material on offer here is interesting enough to be presented even this late. In fact, "Enlightened With Pain" is an excellent album that could easily raise the enthusiasm of the American-styled brutal Death Metal devotees. But beware, this is not one more album in a rather long list of SUFFOCATION and CANNIBAL CORPSE sounding like releases, far from that. BURIAL know enough about finesse and playing abilities to surprise you. Even if vocalist Devin Doherty makes Chris Barnes sounding like a baby whining (I am dead serious here), then redefining the term guttural thanks to his inhumane voicing, the music shows a lot of subtle variations and even sometimes melody in the guitar soloing department. Don’t be afraid though: BURIAL are a mega-brutal band, but you will be gladly realize that you could listen to "Enlightened With Pain" in its entirety without being bored, I can’t say that about many releases of this kind. The production helps to actually bear this brutal assault on your ears, each of the instrument is clearly separated from the others for a maximized lethal effect. I suppose (and I don’t think I am far from the truth, considering how "Enlightened With Pain" sounds) that the BURIAL musicians kept in mind their Metal roots while recording this, because the result differs from what their American counterparts deliver in term of clarity. So the question knowing if the vocals aren’t maybe too guttural for comfort becomes irrelevant here, because the difficulty to understand them is counterbalanced by the very clear song structures. This is definitively an album to check out, because it shows brutal Death with a difference. Visit Lost Disciple Records at www.lostdisciple.com and BURIAL at www.burial666.com and have a great time with "Enlightened With Pain"!