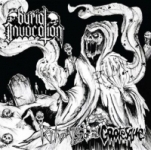 I ask you one question and I want you to answer the truth: did you really expect something special when reading about an old school Death Metal band from Turkey? BURIAL INVOCATION call themselves an old school Death Metal band and I believe you don’t expect anything special and neither did I. Not that it is something special to have a Death Metal band from Turkey around, Death Metal is a world wide phenomenon but to say it like it is: there is no Turkish Metal scene and, perhaps I’m wrong (but this would prove that nothing outstanding was released in this country so far), but I think I don’t have any Turkish Metal recording in my collection. Nevertheless I listened to the songs on BURIAL INVOCATION’s myspace-page, and fuck yezz, this is the true shit. This isn’t only old school Death Metal, this is brutal fuckin’ Death Metal mostly in the vein of such classic as IMMOLATION, INCANTATION and current newcomers (well yes…) like DEAD CONGREGATION and bands like that. BURIAL INVOCATION convince in everything. The whole demo sounds professional from the beginning to its end, the sound is awesome, the guitars are heavy, the vocalist couldn’t be more brutal and the songs are making me insane. Despite the musical differences I would like to compare BURIAL INVOCATION to the freshness of GRAVEYARD’s “Into The Mausoleum” demo as they did impress me as much back then as BURIAL INVOCATION impress me now as I’m listening the fifth time in a row to this great demo. 4 songs offered here in a far too short playing time of 18 minutes. Death Metal, fuck yes, Turkish Death Metal the way you never ever would have expected it. If that’s the start of the Turkish Death Metal scene then beware of the things to come, haha. No serious, this is an awesome Death Metal release, one of the coolest demos of the last months! Nothing more to say! One thing left, Dark Descent Records already released the CD version, the tape version will be released through Skeleton Plague Records and Me Saco Un Ojo Records are taking care of the vinyl version. Check out www.myspace.com/burialinvocation and write an email to burialinvocation@gmail.com including your order now!