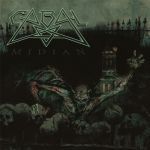 Thanks to Vic Records for having resurrected this forgotten gem of Death / Thrash Metal from the ashes of the American underground. CABAL, together with KILLJOY, was one of Frank Pucci’s side projects after the initial breakup of NECROPHAGIA in the early ’90s. Founder and original member of the legendary band NECROPHAGIA, Pucci was one of the most influential names in the extreme Metal world scene, until his death in 2018. He was also addicted to horror and active in the world of underground horror movies, credited as one of the writers / directors of the cult pseudo-snuff flick “August Underground Mordum”. Responsible for having created an Exorcist like style of vocals in the seminal masterpiece “Season Of The Dead”, NECROPHAGIA knew a second youth in the late ’90s when Pucci exhumed the band with the help of Phil Anselmo and released another killer album called “Holocausto De La Morte” and the EP “Black Blood Vomitorium”. In addition to having created the horror Metal subgenre, Pucci’s harsh vocals have marked the underground with many other bands and interesting projects such as THE RAVENOUS, EIBON, WURDULAK, KILLJOY and CABAL, just to name a few. “Midian” is the first and only CABAL studio session, originally recorded at Morrisound Studio in 1990 and released by Red Stream Inc in 2000. This is a criminally underrated example of American Death / Thrash Metal, worthy of being mentioned as one of the best albums of the genre together with “Scream Bloody Gore” and “Leprosy” by DEATH, early SADUS, DEMOLITION HAMMER, HELLWITCH, “The Ten Commandments” by MALEVOLENT CREATION, MORBID SAINT, “Eaten Back To Life” by CANNIBAL CORPSE, FATAL and “Season Of The Dead”, in fact. Pucci’s vocals are more into Thrash Metal here than in NECROPHAGIA, but nevertheless very aggressive and sick. The Morrisound’s trademark is a guarantee with all the instruments perfectly audible thanks to an heavy and very enjoyable production: a solid bass, hammering drums and punishing guitars. The Death / Thrash Metal hybrid is given by a perfect combination of fast accelerations and more obscure parts, enriched by a galloping double bass. The whole concept (band’s name, cover art and song titles) is taken from Clive Barker’s novel “Cabal”, which was also adapted into the movie “Nightbreed”. Since the lack of good Death Metal bands is still a plague nowadays, the “Midian” reissue from Vic Records is a mandatory addition to your collection, if you’ve missed the previous versions. Not only, this is a fantastic way to pay tribute to a legend and to one of the true pioneers of Death Metal. R.I.P. Frank “Killjoy” Pucci: your legacy of horror, gore and sickness lives forever! www.vicrecords.com