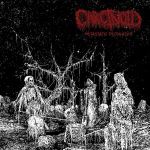 Death Metal has many “faces”. Across its history, the subgenre has been borrowing influences from other types of music, some stylistic aspects and even avantgarde concepts. So basically, if you can imagine it, it may have been done already. But CARCINOID has remained in their own path; the path that leads “back” to the genesis of Death Metal. Dense, heavy, evil, raw and absolutely crushing! And that is exactly how I would describe their debut album “Metastatic Declination”. First off, CARCINOID comes from Australia, a continent that has spawned some pretty big names in the global scene across the years such as CORPSE MOLESTATION, NECROTOMY, BESTIAL WARLUST and more recently PORTAL, CONTAMINATED and IMPETUOUS RITUAL just to name a few. So yeah, I guess there has to be something in the water there. After a very good first release in the form of the self-titled demo tape (included as a much welcomed bonus in this CD release), CARCINOIND has perfected their craft and put out an amazing Death Metal album with a notable Doom Metal infusion. Jess, Carter, Az and Josh keep spewing total madness in their songs, aided by a great, organic and unusually natural production. Mid to slow paced songs hit you in the face time and time again. One of the things that I liked the most off this release is how the band manages to remain absolutely crushing even at their fastest parts. And they make the slower passages even heavier and oppressive. I am still baffled at this feature but they pulled this one out perfectly. Starting with the vocal department, Josh has some pretty deep growls that fit it perfectly for the band’s style. His phrasing is great and very dynamic, which is a neat feature. Az comes up with a bunch of tasty razor sharp riffs that work very good together, so the songs flow nicely without interruption. Jess’ bass tone contrasts the guitars, since his sound is round and thick, mostly following the riffs with the occasional highlight here and there. And to finish it off, those pounding drums make a great backbone to the music. I mean, Carter’s drum work is interesting. Neither too wild nor too basic. It’s the elegant fills that I think rounds up the whole package. I can make comparisons with a bunch of 80s and 90s bands, but that would not be fair. Because “Metastatic Declination” is an album that deserves to be heard and experienced on its own. It’s a bold statement in today’s somehow boring global scene due to saturation. Good news is, every now and then, a band such as CARCINOID comes along to remind us how Death Metal is supposed to be. You can contact the band here: www.facebook.com/carcinoiddeathdoom and get their album here: www.memento-mori.es