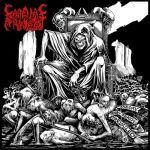 Formed way back in 1997, and with no less than six full lengths previous to this new one, Chicago’s CARDIAC ARREST uses a bloody formula that they have mastered on all those years: putrid Death Metal that owes their sound to bands like CARCASS, AUTOPSY, IMPETIGO, CANNIBAL CORPSE and POSSESSED among others. Yes, and this, I know has been done to death many times. The thing is that with this band, they certainly have done it in a way that you can only like them. OK, I will say that at the end of the day I can recognize the band, yet there are no specific riffs stuck in my head. The vomitivie and low-down tuned Metal of Death, with some weird and wacky solos, that work pretty good, actually works as a zombie that bites every head around. And also, they are still writing things obsessed with death, murder and beyond so this is only getting better. Actually I do have their last two albums somewhere around, and I was able to see the band live last year, and yes, they are a quite good live act, Death Metal the gory way. The thing is that the first impact in the head might as well make you bleed and have brains all over the place, but in the long run, it might as well turn out to leave you alive, yet in bad shape for the rest of your miserable life. After a few listenings I tend to like the previous albums a bit more, especially “And Death Shall Set You Free” which is more in the “Mental Funeral” style, whereas this new one for some reason has more of a “Horror Of The Zombies” essence. Anyway, fans of the aforementioned band, or if you are a follower of the band, you need to listen to it now. The smell of rotting corpses might not be new at all and maybe the taste of blood on the mouth will seem like a recent memory, yet it keeps faith to the roots. www.facebook.com/cardiacarrestdeathmetal, www.memento-mori.es