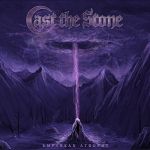 CAST THE STONE from the US was founded back in 2002 and released one full-length in 2005 before they took a longer break. The band finally returns with an EP entitled "Empyrean Atrophy". As I already saw the artwork on Facebook before the release, I was a bit curious what to expect and already the opening track ‘As The Dead Lie’ is not disappointing. Sounding like an hommage to the mighty EDGE OF SANITY, the guys deliver slow to mid-tempo Death Metal with a pretty melodic touch and a good doze of groove. The song lives from its melodies and the vocals sound like Dan Swanö has offered them himself. Blaming them being a bare copy would do them wrong as their songwriting is pretty strong and matured with very fine melodies and hooks and show a huge own potential. ‘The Burning Horizon‘ also starts pretty slow with some nice strings and lives from the deep but fine mixed grunts. I like the song very much as their material is very groovy and melodic but does not sound wimpy and reminds me also a bit of ‘Moonshield‘ from IN FLAMES but with a different structure. ‘Standing In The Shadows‘ is an instrumental interlude, showing their love for classic acoustic guitars and even for the old Swedish Death / Black Metal scene of the good old 90s. ‘A Plague Of Light‘ continues the direction but is an uptempo track again with a very melodic guitar line and again has an old IN FLAMES touch with a brilliant small guitar solo. The last own track on this EP is the title track ‘Empyrean Atrophy‘ which is again very melodic but faster than the rest and could also have fitted on one of the last outputs of ILLDISPOSED. The band closes this fine output with a cover tune of ‘Jesusatan‘ from the buried project INFESTDEAD. Again a proof that the guys really adore the work of Dan Swanö and his brilliant vocals. Rounded of by a very nice cover artwork, fans of EDGE OF SANITY and ILLDISPOSED must check this EP and hopefully the guys manage to deliver the next full-length pretty soon. For more info, check the following sites: www.facebook.com/castthestoneofficial, www.agoniarecords.com