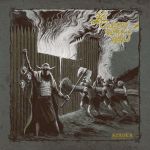 Australia’s CAULDRON BLACK RAM have been around since 1996, though with only four full-lengths. Featuring members of MOURNFUL CONGREGATION who’ve been around even slightly longer, CAULDRON BLACK RAM are sort of all over the place in their music. There’s a little Death, a little Black, a little Doom and a little Freeform in places. Trying to get settled into a steady rhythm while listening to them is near impossible as the music and tempo changes like MEGADETH changes members. “Slaver” starts off with ‘Flame’, doomy guitars in places, chugging guitars in others and galloping guitars in even others. The vocals remind me of an ogre’s threats to a shivering peasant. ‘Smoke Pours From The Orifices Of The Crematory Idol’ (best song title ever) is another slow, murky track, as ‘Stones Break Bones’ is a more upbeat number. The production itself sounds natural as it actually sounds like the band’s playing in front of you. The tightness isn’t always there, but that’s one of the likeable things about them. Perfection isn’t always a positive. ‘Graves Awaiting Corpses’ is a stomper of a track which is followed by ‘His Appearance’ which features maybe the simplest of riffs on the album. But don’t let the simplicity of the track fool you. The band itself shows their talents abundantly on “Slaver” in an ever-changing way. ‘Whore To War’ sounds like an army on the move, ready to smash everyone in its way. ‘Temples To Death’ smothers its listener with a wall of smoky guitars and vocals. The eighth track ‘Slaver’ crushes, as ‘The Pit’ has a classic, Epic Metal sound that could’ve hailed from the 90s. ‘His Exultance’ wraps up the album with its marching drums and slithering guitars. All in all, CAULDRON BLACK RAM have created a satisfying collection of songs. With its constantly evolving riffs throughout, you won’t get bored. It definitely fits in its own little niche in the Metal world. For more info, check out www.facebook.com/cauldronblackramofficial, www.20buckspin.com