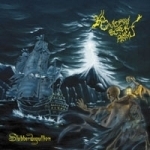 This is a weird one in the catalogue of Blood Harvest Records. Where this label usually is known for mostly brutal and old school Death Metal we have here the vinyl version of CAULDRON BLACK RAM’s “Slubberdegullion” – probably the first Pirate Death Metal band. Am I serious? Well, I don’t know. It’s a mix between Death and Black Metal with slight hints of GRAND BELIAL’S KEY and enriched with gimmicks of pirate elements. The Death Metal Pirates of the Caribbean? Hm, am I serious? Well, I still don’t know. Basically everything is utterly professional on this vinyl. The layout is amazing, the coverdrawing, the presenting of the lyrics, drawings in the inlay. Everything is done just the way it should be. Highly professional and original, this speaks for Blood Harvest Records, this speaks for the band. The sound could be a little bit better though, nevertheless it suits very well to the songs on this album. The 2nd song ‘Black Market Trade Of Whore And Blade’ starts with swords-rattling – which turned out to be a little bit too long if you ask me – until the real song starts. As I said, a little comparable to GRAND BELIAL’S KEY with a subtraction of their evilness (just listen to ‘Satanic Whores In Bestial Brothels’). I even hear some hints of SKYCLAD here and there which is awesome. The band, featuring members from STARGAZER, MARTIRE or PORTAL, convince musically, no doubts about it, and the musical presentation is original to the bone. Nevertheless I think it’s a little bit too much for their own good. Perhaps I’m the narrow-minded fool not recognizing their outstanding qualities. I think there are a few really good songs on this album, especially the above mentioned ‘Satanic Whores In Bestial Brothels’, I hoped for a little more outstanding stuff not only originality in sound and style. At the end it’s the songs which make an album a classic, here I think there’s more to ask for. We will see what the future will offer us on their next recordings! For openminded Metal freaks perhaps a revelation? Check out their myspace-page first at www.myspace.com/cauldronblackram. Available from www.bloodharvest.se.