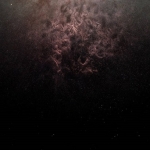 Atmospheric Black Metal never was my favorite genre (except for a few bands) and this release will not change my preferences. Although I must admit French based CEPHEIDE did a very good job. At its best moments the two tracks on the "Respire" EP are able to create an absorbing mood. A mood which can not be compared to most Funeral / Suicide Black Metal bands, although the band uses the same tools (hypnotic drums, repeating one riff over and over again, synthesizer). Of course sometimes there is this typical feeling of despair and sadness, but mostly the music tries to establish an atmosphere of reaching for the stars. The feeling of getting lost in aeons of space and time, traveling through the vast and cold cosmic void. May sound strange at first sight, but I guess it is no coincidence that the band is named after a type of star that pulsates radially. The only aspect which really got on my nerves are the reverbed shrieky vocals. But luckily they are very often disappearing in the mix, especially during the blasting up-tempo parts together with heavy use of keyboards. May this sound be done on purpose or not, personally I do not miss this kind of vocals. If the duo manages to cut off the more boring, slower passages then maybe, maybe the music of CEPHEIDE could be compared to LUNAR AURORA (yet another band named after an astronomic phenomenon) . Having in mind CEPHEIDE being formed just three years ago and having just one demo tape released prior to "Respire" this comparison is impossible, but I wonder what the future will bring. www.facebook.com/cepheide, http://cepheide.bandcamp.com, www.sickmangettingsickrecords.de