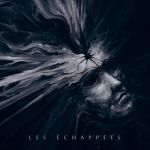 Dark and atmospheric Black Metal from France. Massive walls of distorted bleak guitars, twisted disharmonic guitar leads, pummeling drums and insane wicked vocal work, is what we get with CEPHEIDE’s second full length effort “Les Éschappées”. We could stop the review here, do you really need to know more? The band was formed in 2013 and had 5 strong years, as a band, releasing a killer demo “Silence Et De Suie” in 2014, followed by the quite good EP “Respire” in 2015. The first full length “Saudade” saw the dark side of the moon in 2017 – all three releases with a fine distinctive line between them, though I have to admit I find the first two releases the strongest. It seems like something wasn’t totally right on the band around “Saudade”, and CEPHEIDE did disband not long after the album’s release. In 2019 we saw the band return as a duo with the split release with fellow French space inspired Black Metallers TIME LURKER – and now we write 2021 and the band is a one-man project by Gaetan, who has handled guitars and vocals from the band’s beginning. As written, CEPHEIDE’s universe is centered about the universe. My French isn’t very strong, so I haven’t been able to translate either lyrics or song titles with the emphasis, that might be needed to get into the universe of CEPHEIDE and interpret between the lines. We can then have the discussion about what defines Black Metal, orthodox or not. Though let’s have that discussion in another forum. CEPHEIDE is heavily inspired by Black Metal in their musical set up, from rhythm patterns to vocals to use of a dark and bleak, evil, atmosphere, and they pull it quite well off. The music is dark and drawing and quite offsetting at other times, mesmerizing, and pummeling. At certain times it feels like an Black Metal equivalent to space inspired Death Metallers BLOOD INCANTATION! Enter the chaoplasm: www.facebook.com/cepheide, www.facebook.com/ladloproductions