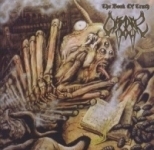 The re-release madness continues, and this time we are heading to Sweden to a band, that we could call the predecessor to first and foremost IN FLAMES, and some years later on HAMMERFALL. Though before all that noise CEREMONIAL OATH started out as DESECRATOR delivering raw and not that ‘bangable raw Death Metal. Time went by, and after two releases the band turned into CEREMONIAL OATH and the expression become more melodic, though still very Death Metal, even though the band early on laid the path for melodic Swedish Death Metal. On this release we get the debut full length from the band "The Book Of Truth" originally released back in 1993, and two demos from when the band was known as DESECRATOR, as well as the "The Lost Name Of God" 7" from 1992. The DESECRATOR demos are raw and not all that good, musically, though it gives us insight in how the band developed from rather bad and boring, with a drowsy Punk Hardcore vocal from Oscar Dronjak, to how he discovered the reverb-controller and started to puke out great growls, and further on. Musically we are speaking raw and simple Death Metal to when the band discovers the melodic side of brutality and starts to work out from that blueprint, with some old school American and European Death Metal and Thrash Metal influences, and small haunting pieces of horror on the "Black Sermons" demo, which are my favorite on this release. As we get into the world of CEREMONIAL OATH the already written influence and CARCASS paints the picture, together with the Swedes own perception of melodic supremacy drawn from traditional Heavy Metal, and their own takes of writing the songs. Most of the time it flows, though we do get some strange breaks in form of spoken parts, group shouts and so forth. CEREMONIAL OATH is an interesting study in how Swedish (melodic) Death Metal has evolved, and where the gentlemen Iwers, Dronjak, Fridén, Strömblad, Nordberg and Nordström have roamed early on in their careers. A must have for fans of the melodic genre, even if the original is on the shelf, as the demos and the 7" EP are good fun. More info at: www.facebook.com/ceremonialoathofficial, www.centurymedia.com