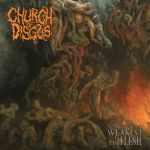 The best way to describe this release is that it’s heavy and brutal Death Metal. After the first hearing of this album I was impressed. However, I wasn’t immediately on the assumption that this deserved an “A” rating. But upon repeated listens to, the more I thought higher and higher of it. These guys aren’t entirely new to the scene, they have some full length LPs. Based in Texas and on Hell’s Headbangers Records they’ve really stepped up a performance. The guitars and vocals seemed to grow on me. They are just downright heavy. It’s kind of like SHED THE SKIN’s latest “Thaumogensis” which is another band on Hell’s Headbangers. That label attracts some brutal stuff, but good! The guitars are noteworthy and catchy. Alongside the vocals, they’re really equipped to accompany the music. There was small bits of keyboards too, but not while the guitars were playing. Something unique to have on a Death Metal record. It reminds me of the second MALEVOLENT CREATION release “Retribution.” The vocals are just chunks of slab hoarse as all hell. The sound quality was good, there were no instruments drowned out by anything. Really well produced. My favorite parts are the chunky guitars mixed with the voice. Overall, a great effort. I’m not too interested in their older work, I just hope that they’ll continue to progress musically. With this gem being as it is, I’m hopeful they’ll keep up with momentum. The songs are really fast they’re moderate to slow tempos and the lead portions (guitar) are pretty technical. There aren’t a heck of a lot of leads, they just are featured on a few songs. Their musical maturity is way there and they show that they’re definitely a solid band. This clocks in about 40 minutes which I wish would’ve been longer but they made their mark in Death Metal history with this monument. There’s nothing else that I would change about this except the duration. However, I feel that they made their contribution to the extreme Metal community. And that they have! Don’t wait any longer, this is where it’s at in a landmark release on this label. Do what you can to find more out about it! www.facebook.com/churchofdisgust, www.facebook.com/hellsheadbangers