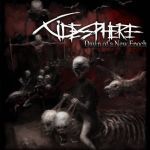 It’s been 18 years since the first full-length by Turkey based (not to be confused with ‘turkey baste’) CIDESPHERE, after reuniting in 2017 (which explains the long stretch between albums). But give credit where credit is due. The band had time to polish their sound for new album “Dawn Of A New Epoch”, which is fitting since they have a fresh start after their hiatus. The album begins with ‘Reborn To Extinction’ which firmly plants their boots into the ground before their running start. The guitars jitter and chug, in a fairly melodic direction that’s not too chaotic, but settling in nicely with a more polished delivery. ‘Plague Of Greed’ doesn’t push down any walls, but certainly satisfies in its consistent band sound and solid production. The vocals are growling purges of energy, the guitars are boundless and the drums steadily keep a thudding beat. The beautiful acoustic guitar at the beginning of ‘Living Scars’ breathes life into mid-paced bliss as the trademark guitar riffs in ‘Sacred Patronage’ keep the album flowing smoothly. ‘Sadist’, yet again, brings in those almost IN FLAMES style guitars, while adding CIDESPHERE’s own sound in the mix. ‘Dawn Of A New Epoch’ contains swirling guitars and trollish vocals that are powerful and bludgeoning in their own way. The rest of the album, including ‘Death Is Only Ours’, ‘March Of The Backstabbers’, ‘Hate Design’ and ‘Sui Caedare’, continues the similar Death Metal sound much as the previous tracks. If you like your Metal to contain skilled musicianship, solid vocal growls and fine production, “Dawn Of A New Epoch” is probably what you’re looking for. You might not feel the hellfire burning through your lungs while listening to it, but you won’t feel empty inside either. This is a group of songs that waste no time in theatrics. CIDESPHERE play Metal as it should be, and you won’t be disappointed. For more info, check out www.facebook.com/cidesphere, www.facebook.com/testimonyrecords