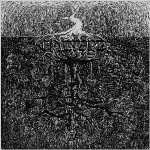 Do not be fooled by the band’s name, CNTMPT are hailing from Leipzig, Germany and not from Russia. Furthermore I am not quite sure whether it is an abbreviation with the vowels missing or Cyrillic script (I would vote for the first option – Frank). But what is better fitting for a Black Metal band than a mysterious moniker? The band was founded back in 2011, they published a digital single, the self-titled debut in 2014 and now "Towards Neglect". It is also not surprising that the members decided to stay anonymous, but info is given that they play(ed) in bands like ANTLERS, EVIL WARRIORS, II, BLACK SALVATION, DIVISION SPEED, BLOODY VENGEANCE and VIDARGÄNGR. Most striking on this album are the long instrumental parts, vocals are very sparely used. Only ‘Ascend Through Winds’ and ‘The Arrival’ are acoustic guitar songs. Even though the vocals are not omnipresent, when they make an appearance they really impressed me. Every kind of Black Metal vocals are used, from aggressive shrieks to reverbed chantings up to suicidal screaming. Same goes for the music, it is not one-dimensional, instead very intense and dynamic, with a strong guitar work and well played, forceful drums. Regarding the tempo, it is mostly played fast up to blast beating lunacy, in addition with the sometimes melodic, sometimes barbaric and battleful, sometimes desolate riffs forging a Black Metal experience at its best. CNTMPT crafted a vision so far away from normal day life and light, the listener is taken on a journey to the heart of darkness. Well, that is what Black Metal is supposed to be in my eyes. In 2015 Polish based MGLA caused quite rightly an uproar with "Exercises In Futility". Three years later CNTMPT are following the footsteps of this brilliant album. It always sounds pathetic, but if call yourself a Black Metal fan you have to take a listen! Or better buy this output, it’s released on vinyl and CD with an excellent cover, artwork and layout. www.facebook.com/cntmpt, www.intoendlesschaos.de