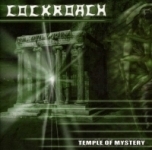 When I received this CD not too long ago, I originally didn’t really expect to get blown away by it for one reason or another… Sometimes I simply have a certain feeling whether I will like something or not already right from the moment I open an envelope – but in COCKROACH’s case this luckily turned out to be a wrong impression! Ok, I wouldn’t exactly say that the German fourpiece completely knocked me off my socks, but at least this album turned out a lot more convincing and enjoyable than I originally thought it would be. Before I actually listened to it, I assumed that there might be a certain musical connection to older VOIVOD because of their choice of bandname, but that wasn’t the case either. They still have a big 80s influence in their writing though, in particular when it comes to the long lost glory of San Francisco’s Bay Area Thrash Metal scene! Never heard the band’s two previous releases "Fi(r)st" (1997) or "No Compromise" (1999), but "Temple Of Mystery" definitely is a feast for worshippers of the old school Thrash sound, with a major focus on the classic TESTAMENT style. The vocals aren’t completely convincing yet (somewhere in between Hetfield and Chuck Billy though), but there’s enough potential to be heard that I am sure they are already developing in the right direction. Unfortunately their overall good musicianship, the solid production and refreshing songwriting aren’t really complimented by a similar quality bandlogo, which actually still looks rather amateurish and might turn a few people off to check this release out. So, my advice is: get yourself a cool designer and make sure your next album sleeve comes across more attractive, otherwise you might be overlooked pretty easily these days. Apart from that, all those of you who still play their old Thrash records with joy are adviced to check these guys out. Band contact: www.cockroach.de.vu, Label contact: www.s-c-r.de