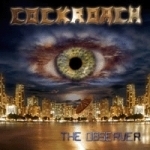 Founded in 1992 veteran Southern German Thrashers COCKROACH now come up with their fourth album. Embedded in a powerful production they deliver twelve tracks of crunching Thrash Metal, strongly influenced by the big names of the Bay Area sound and other stars of the 80s US Thrash scene. They successfully strive for variety in songwriting, but surely cannot compete with the classic albums by the likes of TESTAMENT, OVERKILL or SACRED REICH. The slightly monotonous vocals certainly account for this minor flaw, because more charismatic vocals would have definitely strengthened the auditory pleasure and memorability of the songs. Nevertheless, this is a more than solid Thrash Metal album from the German underground, without any major weaknesses or surprises. To judge for themselves, fans of classic Thrash Metal should listen to the mp3 excerpts from "The Observer" on: www.cockroach.de.vu.