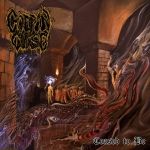 COFFIN CURSE formed in Chile in 2012, created as a side project for the band INANNA. Well, I have not heard the main band, but after starting to hear this release it’s hard to stop. This is some of the most malefic, abhorrent and extremely well played Death Metal done in the last years. I am not exactly surprised as Chile has been the cradle of some of the best Metal bands worldwide for some time now. Although the main style is Death Metal in the DEICIDE style, there are touches of old MORBID ANGEL, INCANTATION and early ENTOMBED. But there is a very strong old school Thrash Metal influence here, specially old SLAYER, KREATOR and DESTRUCTION. And the main ingredient here, besides a killer performance and great production is one: the riffs. The killer riffs. One upon another, the riffs are so great, catchy and malevolent, and done in such an easy way that it sounds like a very experienced band after a few albums rather than this being their debut. Also this material has that charm that every new time you listen to it, new things will appear as the black arts sets in. Not only they start this album with intensity, it also ends on the same level and in between there is never a single song that is short of great. And this is real Death Metal from the lyrics to the haunting vocals, which even by the standards for the genre, they are not boring or one dimensional. And the drumming is also quite great as it enhances the songs in a great way. This is a trule jewel of some of the best extreme Metal ever to be released in the world, and along with the mighty UNHOLY FORCE debut album, we have one of the best releases form that land, and one of my contenders for best album of 2020. Utter death! www.facebook.com/coffincurse, www.memento-mori.es