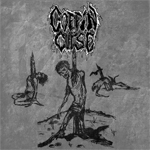 What do you do, when you obviously have too much energy to spare? When two bands are not enough? You form a third one, of course. Max Neira and Felipe Zará from Santiago de Chile must be musicians with lots of energy. Both of them are active in INANNA and TRIMEGISTO, Felipe is also the drummer of DOMINUS XUL. And now they started a duo, with Max doing everything except drumming. This two-track demo is their first sign of life. And it’s a raw one. Death Metal the simple way, but not without breaks and speed changes. The first song ‘Out Of The Grave’ starts off with a striking resemblance to POSSESSEDs ‘Swing Of The Axe’. But the impact AUTOPSY and MASTER is also hearable in this song. With ‘Church Possessed’ you get a doomy version of old AUTOPSY with some ideas of SAINT VITUS as well. So the influences are first class and the result is pretty promising. Add a very simple (sometimes even too simple) production and you get a demo like in the good old 80s. This stuff should be pleasing any old school Death Metal maniac, who prefers the simple and American. By the way: this would make a very fine 7" vinyl… In case you’re interested, contact coffincurse.death@gmail.com, or listen to ‘Out Of The Grave’ here.

COFFIN CURSE - Ceased To Be - by Julián "Grave Offender" Núñez