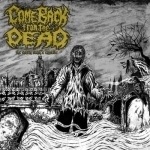 COME BACK FROM THE DEAD
The Coffin Earth's Entrails
(BlackSeed Productions)
36:13min

Spain’s COME BACK FROM THE DEAD were formed back in 2008 and present here their debut album. For some reason the name of the band reminds me of a song from the album “Rotten Death” from the mighty Swedish band TORMENTED, in fact an album so great that it is amongst my top 10 Death Metal albums of all time, and precisely that song has a riff that although I am sure I have heard it the last time 4 or more years ago, it is still in my head. Well, so it is of no surprise then that this five piece is doing a Swedish infested style of maggot Death Metal. The first thing that strikes here are the vocals, which sound a bit more Hardcore than Death Metal, although the music is without a doubt in the vein of DISMEMBER, ENTOMBED, UNLEASHED and all those others you all know. The production is also a bit weird as the drums sound drowned, and although it is clear enough, I feel that some power is missing here. The band is also relying a lot on the good old d-beat sound, and more than once I had to check out if this was not a demo recording from NIHILIST or UTUMNO as the riffs are almost an exact copy. As much as I love that guitar tone and catchy riffs, and let me tell you that I am one of those who cares not that much about originality, but more in the passion while playing, I still feel that something is missing here. At first I tought it was the more Hardcore / shouted vocals, but after a while they get along with the music, although they can get on your nerves. Maybe it is something regarding the drum sound and that many riffs are based on same formulas, no matter that there is some really good stuff here. And band’s doing a similar thing, there are really a lot more doing it better. If the band gets a better sound, specially on the drums, and they get more growling vocals and let those AUTOPSY influence shine on more, we are in for greater things. By now, this is just a promising band. https://comebackfromthedead.bandcamp.com, www.blackseedprod.com