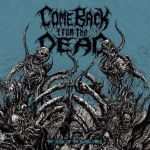 COME BACK FROM THE DEAD
The Rise Of The Blind Ones
(Transcending Obscurity)
32:24mi

Spanish horror Death Metal from the Galician town of A Coruña. The band was formed in 2008, going for a couple of years with a little hiatus before starting a ruckus from 2012 and onwards. This is their second full length album, and fourth release in total, all sporting a love for midpaced Grindcore and Death Metal from the beginning of the nineties. Lords of grim and horror infected Death Metal like AUTOPSY and REPULSION can be found in the sound of COME BACK FROM THE DEAD, together with the chugging groovy guitar sound of early Swedish Death Metal and a vocal that will make Johnny Hedlund, of UNLEASHED and NIHILIST fame, quite proud. A little gem for people into said style and mentioned bands and genres. “The Rise Of The Blind Ones” is a good tribute to a time that once was, masked in some good music, and quite some AUTOSPY and REPULSION riffing and set-ups, which isn’t a bad thing at all. Enter the grip of winter right here: www.facebook.com/comebackfromthedead, www.facebook.com/transcendingobscurity