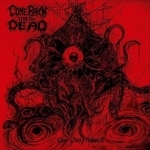 With COME BACK FROM THE DEAD, we have another fresh signing from the always busy Indian label Transcending Obscurity Records. The band hails from the Spanish town of A Coruña in Galicia, that was also the home of the pretty well known Death Grinders MACHETAZO. Their former drummer Marcos started COME BACK FROM THE DEAD in 2008 after the split of ABSEDIO with their guitar player Hector. Yet it took them a few years to get a steady line-up together, thus COME BACK FROM THE DEAD really started in 2013 with a demo and their first album “The Coffin Earth’s Entrails” a year later. Three more years later, they are back with a new EP. There’s just four songs on “Caro Data Vermibus”, yet these four really know to please any lover of fine Death Metal with a slight grinding twist every once in a while. The overall speed on the EP is not really over the top. Instead, COME BACK FROM THE DEAD base their style on mid tempo grooves with some beats that remind of early Grindcore in the vein of REPULSION. Due to this groove of gore, COME BACK FROM THE DEAD are a real threat to any neck muscles. It’s only the opening tune ‘Vomits Of A Demonic Infestation’ that is a little more on the fast lane. But with the delighting, slowly grinding simple beat of the title track, my nape starts aching. ‘Endless Bloodshed’ has a D-Beat pattern that kills, eased with speed changes when they are needed. The final ‘Carnivorous Craving From Beyond’ finishes any neck muscle off, due to grooving and killing beats. With “Caro Data Vermibus”, COME BACK FROM THE DEAD put out a nicely grinding blood feast for anybody out there with a good physical constitution… Check the band: www.facebook.com/comebackfromthedead, or visit: https://tometal.com