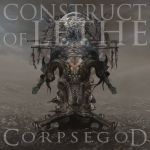 Writing reviews never gets boring. Sometimes I feel like some kind of profiler or private eye to get the picture of a release. CONSTRUCT OF LETHE were formed by Tony Petrocelly because he had written material for the other bands he was involved, namely BETHLEDEIGN, XAOC and DEAD SYNDICATE. Since all these bands split-up or were paused he thought it is a good idea to record the music he had written. So in the year 2014 / 15 all in all three albums got taped and the idea was to release the albums one by one. But something happened, since only two of them saw the light of day. “Corpsegod” in the year 2016 and two years later “Exiler”. So this version by Everlasting Spew Records is in fact a re-recorded, re-mixed and re-mastered edition of the original album back from 2014, which was nothing but unused material originally written for other bands. Brand new rhythm guitar and bass tracks were recorded, additionally some guitar solos added. Making use of leftovers is always a good thing, but in this case I was a bit skeptical. Hopefully this procedure does not become a widespread precedence, I do not want DISMEMBER or MORBID ANGEL completely re-work their debuts, for example. But enough of that, after just above 200 words it is time to write something about the music. American East Coast Death Metal with a heavy technical touch. Names like HIDEOUS DIVINITY, BLOOD INCANTATION, HYPERDONTIA or TOMB MOLD popped up in my mind. Nothing more? No, nothing more, it is just brutal Death Metal played by extremely skilled musicians. What I miss is some kind of recognition factor, all riffs are not bad but nothing more than average. Anyway “Corpsegod” has a clear, forceful and punchy sound, not a blurred and muddy stew which almost ruined the latest DIABOLIC album “Mausoleum Of The Unholy Ghost”. But back to CONSTRUCT OF LETHE, for me its an ordinary album, but fans of above mentioned bands should definitely visit www.facebook.com/constructoflethe or the label at his location www.facebook.com/everlastingspew.