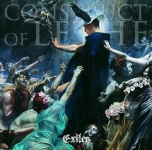 For a band formed way back in 2001 under a different name, this is just the second album of this American band. If you take a loom at the cover art, even the band name, it will be hard to realize what kind of style the band plays. The art reminds me of some used by HATE ETERNAL, and in a way the music has also some references too. But I believe that it will be MORBID ANGEL in their most technical and dissonant era that is where this band really belongs to. There is a lot of very weird and strange riffs used, do not expect your everyday straight forward Death Metal, as there is some here, but the band is always doing twisted riffs and off tempos, to create music that while it is not easy on the first listening, it grows with each time you spin the disc. References to bands like VOIVOD in their more sci-fi albums are also true here, and it speaks of creativity that is not something usual nowadays. And that creativity comes up backed by very good musicians as even with the weird tempos at at times used, their performance is more than up to the challenge. The guitar playing is quite diverse, with good solos, and asphyxiating riffs, again, with sometimes a very twisted sense of melody and rhythm yet without sounding as a mass of noise, but as the impending doom upon mankind. Most of the songs have a very up-tempo, even those that are not played that fast, and we have to mention that the bass is doing a very good job, and that the drummer is very impressive. Yes, fans of the more twisted and technical Death Metal à la F,G and H of Trey and company, or some of later IMMOLATION will love this one. And on its own it is a very good album, very morbid and sinister, atmospheres created with such horror that will surely make you take a loom around for that moment when the unknown will drown you. An album that grows with each listen. www.facebook.com/constructoflethe, www.everlastingspew.com