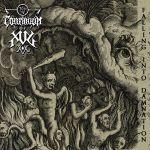 Formed in Italy not so many years ago, this is the second work from this band that plays evil Death Metal, influenced by MORBID ANGEL, IMMOLATION and POSSESSED to name a few. With those references one could expect a band just trying to emulate their heroes, but in this case not only they do that, they actually came out victorious in a way few are able to conjure. Usually fast riffs, evil atmospheres and demonic vocals from hell are the game here. The production fits perfect for the music style, and it also helps that the execution is done with unholy grace. Vocally they are the just amount of evil growls that invoke David Vincent in the “Covenant” ways. They are the type of Death Metal band that borders on the evil satanic way, closer in heart to Black Metal but then again it’s all under the same dark lord. And while I like the way they do when their veins are infected with high speed Metal of Death, when they play slower like in ‘Dreaming In The Underworld’ they do a great job, and the references to Trey Azagtoth and company are more obvious here, but that is never a bad thing when done in this evil way. Three original songs, one intro and a cover from the debut album of Texans ABSU is just not enough. And then as a secret bonus, the songs of their debut demo are also included here, with the same level of production and execution, and of corpse a cover of the band that is their main influence is done in a very exquisite way. Now this will make the wait for a full length a glorious one… www.facebook.com/continuumofxul, www.facebook.com/lavadome

Julián “I Shall Be Thy Lord” Núñez

Julián "I Shall Be Thy Lord" Núñez