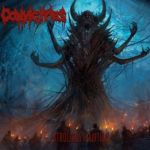 CONVICTORS is a band spawned from Germany. They are not a familiar name like SULPHUR AEON, REVEL IN FLESH and some other acts from the newer generation of German Death Metal, but they are easily on par with those in terms of quality and professionalism. They have quite an interesting history, as they have been around since 1986. Once releasing the maiden demo “The Last Judgment” in their foundation year they got lost in time. After 23 years of silence, they resurfaced with their EP “Abdication of Humanity” in 2009 and again after few years of silence their first full length “Envoys of Extinction” has been released in 2014. It seems CONVICTORS has always been keen to take as much time needed before releasing anything and this time they took a bit less than 5 years for finalizing their second output “Atrocious Perdition” which is now released in association with Kernkraftritter Records. Although unknown to the masses but their Death Metal is traditional, aided by dark melodies and atrocious atmosphere. They play a style closer to the US than to the Swedish school, although they draw some influences from GRAVE as well. From ‘Remnants Of Sanity’, ‘All Hope’s Gone’ to the end with ‘Aesthetic Mutilation’, it’s an engrossing listen from start to finish. The songwriting skills of the four guys are fantastic as the haunting, very intense atmosphere along with some pummeling attacks will surely going to stick with the listener after the first spin. A strong and assertive thing to mention are the vocals of Fabian. He delivered with fascinating range and his voice sounds voluminous and dominant, where he growls like an ancient beast, but the lyrics are still perfectly understandable. The production works perfectly here as it sounds like a desirable balance between sounding powerful and clear but also filthy and raw. “Atrocious Perdition" is like an example of fine craftsmanship where they are not offering anything original; however they delivered with enthusiasm and determination. No matter how long they took to release only few records but their uncompromising and spirited journey and subsequent creations are far more significant and praise worthy than releasing numerous records year after year with unintelligible breakneck riffs and feeble compositions. Represented with a consuming artwork, “Atrocious Perdition” is highly recommended for fans of classic Death Metal, which always transcends dark cold melodies and atrocious atmosphere. Explore more about the band at www.facebook.com/convictors86 and visit their label page: www.kernkraftritter-records.de