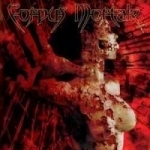 Danish CORPUS MORTALE seem to have been active since 1994 and I guess that the band did not only slip through my fingers, but hopefully with their first full-length “With Lewd Demeanor” this is going to change and the guys finally receive the attention they deserve!!! The trio presents an extremely wellproduced slab of old school Death Metal that blends the dark heaviness of MORBID ANGEL with traditional Swedish Death Metal elements, quite melodic leads, interesting breaks, technical skill and deep growls. Although CORPUS MORTALE’s debut will hardly be the album of the year, the consistent songwriting, the twisted and diversified structures and the crushing sound make “With Lewd Demeanor” a valuable addition to any serious Death Metal collection. CORPUS MORTALE are one of the few younger bands around, which manage to develop a pretty individual sound already on its debut and do not try to be the most brutal, the most extreme, the most whatever act around, but just is a damn good timeless Death Metal squad! Visit www.corpusmortale.com or www.neurotic-records.com for additional info and some other great band photos like the one in the CD booklet, where the three guys look like the long haired edition of The Blues Brothers, haha.