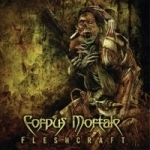 CORPUS MORTALE from Denmark, who’ve been going for 20 years, present their 3rd full-length album (after a 6 year gap from the last one), but I haven’t heard anything by them up until now. Did I miss much? Judging by "FleshCraft" not really. But let’s not get all negative, let’s find some positive display of brutality. And there’s plenty of it. In fact "FleshCraft" is one hell of a brutal album, there isn’t any wimpy melodies or shit, the riffs are beefy and not too technical but still catchy enougth to drag you into their primitive groove. Deep growling vocals add to the overall brutality and the drummer shows an impressive display of fast and solid beating over the skins. So the ingredients are there and sometimes they manage to rip through the bones and make me headbang as in ‘Love Lies Bleeding’ for example. The production lacks a bit of a punch for me, it sounds quite dry, but overall it even stands out from the mass, so it could be a good point, I guess it’s a matter of taste anyway and it definitely isn’t bad, it is very upfront and in your face, but that takes away from crushing heavyness. So why then I don’t feel hooked and fleshcrafted completely? Main reason – all that brutality starts to get one dimensional and I start to lose interest towards the end. Opener ‘Weakest Of The Weak’ and ‘A Murderous Creed’ among couple others get me to want to kick somebody, but not very much. Deeply it lacks burning aggression, that chaotic or crazy element which unleashes inner demons. They remind me of MONSTROSITY, more dull MALEVOLENT CREATION moments and a bit of VADER, but of course mixed with Danish Death Metal flavour, mostly INIQUITY, a band connected with CORPUS MRTALE, and also EXMORTEM. Hey, how long ago sombody listened to their albums? If you are one of them, then dicard my opinion, hehe. And so let’s make your mind up already – if you need an solid, semitechnical, old school brutal US Death Metal influenced shot – get "FleshCraft" and have a blast. They didn’t convert me, but their OBITUARY’s ‘Slowly We Rot’ cover from the previous album is mighty killer and I would go to see them playing live for sure. www.facebook.com/corpusmortale, www.corpusmortale.net, www.deepsend.com